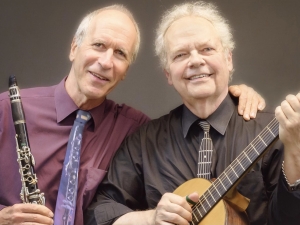 Internationally acclaimed swing jazz duo Billy Novick and Guy Van Duser will be performing a high-energy fundraiser to benefit ArtSpace’s restoration work being done at the 100-year-old historic Fowler Middle School. Challenges with renovations to the building have left some ArtSpace artists without access to their studios, and the funds raised will help to reopen all of ArtSpace to its artists and the public.

Musical partners for more than four decades, Billy and Guy have performed in concert halls, clubs, and festivals all over the United States and Europe. They were frequent guests of the Prairie Home Companion broadcast and NPR’s All Things Considered, and have played on numerous film and TV soundtracks.

Billy and Guy’s music is based around Guy’s innovative finger-style guitar wizardry, and his uncanny ability to play bass lines, chords and melodies simultaneously. With his daring musical imagination and breathtaking technique, he’s an inspiration for his Berklee College students and the world over.

With Billy’s vast knowledge of the classic jazz era, his dazzling improvisational skills, and his entertaining vocals, he adds a spark to Guy’s guitar playing. Their music sounds fresh and original; and boy do they swing!

Together they create a pulse as driving as any big band. Their musical telepathy and understanding has been honed by forty years of playing together, a rhythmic drive that doesn’t quit, and a thorough mastery of their instruments. Their relaxed, humble, and engaging stage manner means you are in for a joyously entertaining treat! 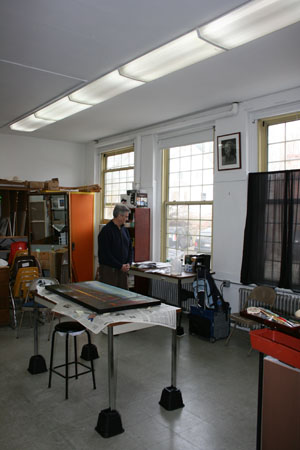 Donate to help return displaced artists to their studios:

ArtSpace enhances the culture of the region by providing affordable art studios, a public art gallery, open studio events, and an educational resource for local schools. We need financial help to keep the landmark building and its cultural mission open for the future. Thank you for your support!
SUPPORT ARTSPACE
Scroll to top