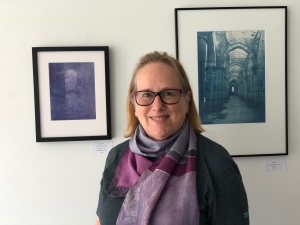 Gail Erwin is an artist and has had a studio at ArtSpace Maynard since 2001.  She has been on the ArtSpace Gallery Committee for most of her tenure at ArtSpace and has participated in ArtSpace events on a regular basis.

Erwin has been an artist for over 25 years and has shown her work in many venues regionally and nationally. In 2014, she became a founding member of 6 Bridges Gallery an artist run gallery in Maynard, MA.  From 1999 to 2014 she was a member of the Kingston Gallery in Boston’s South End. She had may solo exhibits in both of these galleries and at other venues.